The Kinney Group team began working with the Splunk technology all the way back in 2013. Since that time, we have consistently seen organizations run into challenges as they work to fully activate and adopt the platform.

There is no denying the power of Splunk and the insights the platform can provide to organizations. Whether the use case is security, IT operations, business intelligence, or an industry-specific application, the Splunk platform provides the means to gain incredible operational insights from all kinds of data sources.

Since 2013, our Kinney Group team has delivered well over 400 engineering engagements centered around helping customers with their activation of the Splunk platform. What we have typically seen is that organizations new to Splunk will start off with a specific use case. More often than not, the initial Splunk use case yields results quickly, and organization stakeholders get very excited about the platform and its potential. (And they should.)

Getting “Stuck” with Splunk

After the initial buzz of success with Splunk wears off, many times the personnel managing and supporting the Splunk platform get pulled in another direction or put on a different project. Consequently, the excitement about the platform wanes. In a word, many Splunk implementations get “stuck” after the initial use or even during execution of the initial application of Splunk.

Customers who find themselves “stuck” with their Splunk implementations tend to lose enthusiasm for the platform and all that Splunk technology can offer. It really is very common to have this happen. But despite the fact these organizations are stalled in their plans to maximize their Splunk investment, the power and promise of the platform remains!

Here at Kinney Group, we have come up with an answer for how to take customers from “stuck” to “unstuck” with their Splunk implementations.

We’re thrilled to announce the “Jumpstart Service for Splunk.” With this service, we have a singular mission aimed at stalled implementations of Splunk—and that is to get Splunk implementations “unstuck” and breathe enthusiasm for Splunk back into the teams that are using the platform.

For less than a thousand bucks, Kinney Group provides a one-day jumpstart service that will get customers moving forward with Splunk. This service can be purchased via a credit card on our website—it’s as easy as that! To get to the Jumpstart Service, simply click here and you will be connected to the Jumpstart homepage.

Get Your Team “Unstuck” with Splunk Implementations

We have tested this service concept with “stuck” Splunk implementations and have experienced tremendous success. Organizations will be amazed at how much they can accomplish in just one day of focused immersion with one of our top-notch Splunk consultants.

Jumpstart Service for Splunk is designed to help companies that are:

If you are “stuck” or “stalled” with your Splunk implementation, get rolling again with our Jumpstart Service for Splunk—it just might be the best thousand bucks your organization has ever spent! 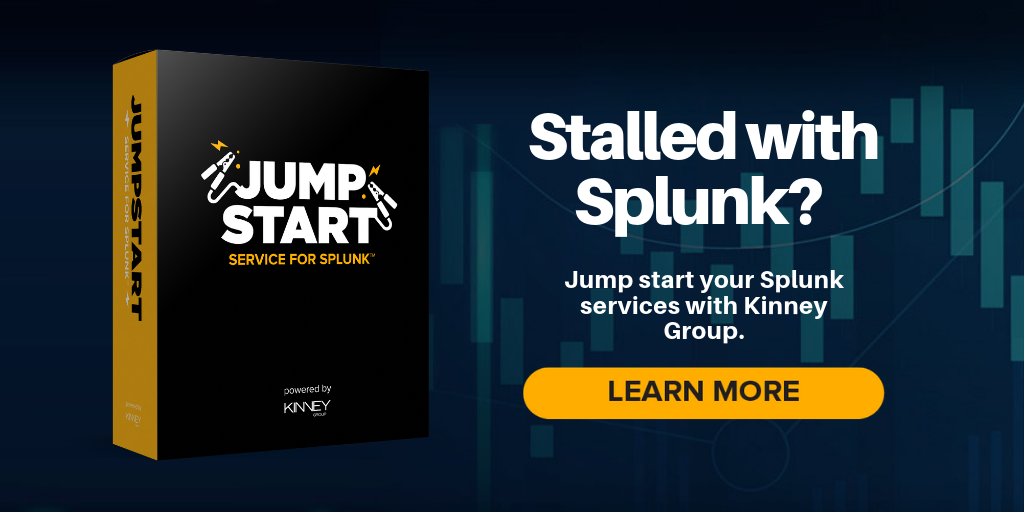